“Motion Amplification technology allowed us to identify movement in the bearing pedestal…With this knowledge and by calculating the predicted failure date the fan was proactively removed from service to repair during low load periods.”

There are two Induced Draft (ID) Fans critical to the operation of each 700+ megawatt turbo generator at this Power Station. Staff had been monitoring a steady increase in axial vibration at the Fan Drive End Bearing of one of the two ID Fans for Unit 3 turbo generator. The axial vibration amplitude had increased from 1.75 mm/sec RMS to 8.5 mm/sec RMS over a 2-month period. The vibration analysts were finding it difficult to identify the root cause of the increasing trend and noise coming from the coupling through traditional vibration analysis techniques. Historically this type of fault would have been left to run to failure resulting in a $70k/hour loss of generating revenue for the business.

In alliance with the generator’s engineering team a leading global consulting company, ALS Industrial, applied RDI’s Motion AmplificationTM (MA) technology to help solve the emerging ID Fan problem. From arriving at the location of the ID Fan in the power station, setting up the video camera and acquiring several MA videos it took less than one hour. This hour included the time to analyse the results all of which was done in the field. The MA videos helped identify several problems including: coupling wear and movement on the shaft, bearing housing hold down bolt looseness, frame pedestal bolt looseness and cracked welds between the bearing housing spacer block and fan drive bearing pedestal. During a low load period and a 300MW restriction the coupling, bearing housing and bearing pedestal issues identified were rectified. When the fan was returned to service the high axial motion and vibration had been reduced by more than 70% and was now 0.6 mm/sec RMS. The solution to this problem was expedited and better understood through the application of RDI’s Motion AmplificationTM technology.
View the before and after video at this link along with a full range of case studies at this link. RDI’s Motion AmplificationTM provides visualisation of a structural fault on a Generator Stator Coolant Pump that has gone unresolved for more than 10 years!

There are two (duty and stand-by) Stator Coolant Pumps (SCP) critical to the operation of each 500+ megawatt turbo generator at the Loy Yang Power Station.  One of the two SCPs for Unit 1 turbo generator has had a long history, more than 10 years, of high lateral vibration, sometimes reaching 20 mm/sec RMS.  There have been many attempts to remedy the problem at an estimated material cost of AU$160k. This does not take into account the estimated labour cost of 500+ man hours and loss of power generation revenue.  Some of the attempts to remedy the problem include: laser alignment, base frame spot welds, bracing of pipework, fitment of flexible bellows to the pump suction and discharge pipework, pump replacement x2, motor replacement, coupling replacement. 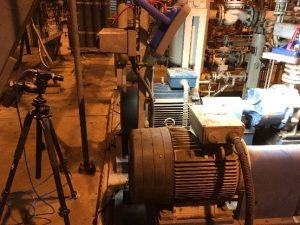 Optical Motion Technologies (OMT) were contracted to apply RDI’s Motion AmplificationTM (MA) technology to solving the long running problem on 1-SCP-2.  From arriving at the location of the SCPs in the power station, setting up the video camera acquisition system and then collecting nine MA videos took less than one hour. This hour included the time to analyse the results all of which was done in the field.  The process involved taking wide angle ‘whole of machine’ videos, analysing them in the field and then honing in with zoomed videos on the root cause of the problem.  It was clear from the MA videos that the problem was a soft foot condition between the pump base frame and skid base plate.  In fact, there was a twisting operational deflection shape of the pump base frame.  During a scheduled outage, a series of fillet welds were made across the suction end the pump base frame to the skid base plate.  When the pump was returned to duty service the high lateral motion and vibration had been reduced by more than 70% and was now less than 5 mm/sec RMS.  The solution to this problem was achieved through the application of RDI’s Motion AmplificationTM technology for a fraction of the time and cost already incurred.

RDI participated in ASCE’s first Innovation Contest and was awarded Most Innovative under the category of Innovative Business Models and Technologies for “BridgeView: A Low-Cost, Non-contact, Camera-Based Infrastructure Monitor”.

The first ASCE Innovation Contest drew entries from around the world, with practitioners, project managers, educators, researchers, and students attracted to the challenge of developing and submitting their most creative and innovative ideas for reshaping infrastructure. From dozens of submissions, a judges panel of 22 experts from across the civil engineering industry named 15 winners. The ASCE Industry Leaders Council developed the contest as part of the Society’s Grand Challenge, which seeks to achieve significant reductions in infrastructure life-cycle costs over the next several years.

RDI has welcomed Dan Nower to the team. He has joined us as the Vice President of Business Development. Dan’s 30+ years of experience doing field service, product development, and machine design with machinery health technologies makes him perfectly suited to help us tackle the industrial market with our new product Motion Amplification and our suite of Motion Explorer products coming out over the next year.

We are excited about all of the knowledge he brings to the team as a Level III Vibration Analyst, registered Engineer, and patent holder.

Welcome to the team!